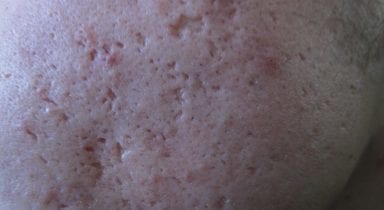 Ice Pick Scars: How To Get Rid Of Them (Easy Read)

Scarring from acne is, unfortunately, very common. Up to 95% of individuals who experience moderate to severe acne developing permanent scarring to some extent or another. Ice pick scars are indented-type scars that result from loss of the deep collagen and fat tissue that give support and fullness to the skin. When these layers are lost, usually as a result of badly inflamed acne, scarring that leave pits, and a dented look to the skin results.

How To Get Rid of Ice Pick Scars:

To understand how to best treat your acne scars, you first need to understand which types of scars are present on the skin. This is because different types of acne scars respond differently to the treatments that are available. Have a look at these images of the three types of atrophic acne scars below to determine which one(s) apply to you most. Keep in mind that many, if not most people with acne scars will have more than one type.

The best and most effective treatments for the different sorts of atrophic acne scars are summarized in the table below. Checkmarks indicate the degree of effectiveness, while an “X” indicates that the treatment is not helpful to get rid of acne scars of that sort. Treatments marked with a “–” indicate mixed or ambiguous results for that treatment with respect to the scar type. Clicking a treatment will scroll you down to a more detailed explanation of how that method works to get rid of acne scars.

A chemical peel uses liquids that essentially burn the upper layers of the skin in a controlled manner. A chemical peel replicates the skin’s natural exfoliation process. Depending on the depth of penetration deemed necessary to treat the acne scars effectively, different peeling agents, and/or different concentrations of the same peeling agent can be used. With deeper peels such as with phenol and concentrated TCA, collagen production is also induced which can help to rejuvenate and “rebuild” the indented scar. Complications with chemical peels include pigmentary changes (both lightening and darkening of the skin), prolonged healing times, and demarcation lines between treated and untreated areas. The potential for more severe complications such as scarring increases when deeper peels are performed that penetrate the skin’s dermis more aggressively.

CROSS (also called dot-peeling) stands for “chemical reconstruction of skin scars”. In this specialized chemical peel, a strong agent (like concentrated TCA) is applied directly into the ice pick scar so that the chemical settles to the bottom of the scar. The difference using the CROSS technique is that when applied correctly, only the ice pick scar is treated, leaving the surrounding skin unaffected. This approach leaves less skin surface that needs to heal, so the healing process can be much quicker. CROSS also induces new collagen formation that has been shown to improve the indented look of an ice pick scar by up to 25% per session. Up to 3 sessions can be performed, usually around 1 month apart.

Lasers can be classified as ablative and non-ablative:

Ablative lasers literally destroy the upper layers of the skin promoting regeneration of a “new” smoother upper skin layer. Examples include carbon dioxide (CO2) and Erbyium lasers. Carbon dioxide lasers penetrate deeper into the skin so can impact deeper acne scars than Erbyium. Greater depth penetration creates a longer healing process for CO2 lasers. In general, side effects of ablative lasers include pigmentary changes to the skin (both darkening and lightening), infection, persistent erythema (redness) that can take months to resolve. A worst-case complication for ablative lasers is the creation of new scarring, generally a result of the laser being used too deep into the skin.

Non-ablative lasers are designed to only affect the skin’s dermis while sparing the upper layers (epidermis). Examples of non-ablative laser systems include Nd:Yag and Diode lasers. By sparing the epidermal layers of the skin, non-ablative laser systems heal quicker, are less prone to infection, and have a reduced rate of causing pigmentary side effects to the skin. The lesser incidence of pigmentary side effects, make these lasers a popular choice for darker-skinned individuals since darker skin tone can be more prone to pigmentation complications of ablative systems.

Fractional laser systems have been designed to combine the benefits of ablative and non-ablative systems while decreasing the potential for complications. These devices create relatively deep pinpoint damage to the dermis, causing very focal regeneration of collagen and other dermal proteins without damaging the epidermis. This approach can treat all sorts of atrophic acne scars, including ice pick scars but has a very speedy healing time (about 1 day) with minimal risk for scarring and pigmentary complications.

With punch excision, a surgical tool called a punch uses a cylindrical blade to sharply cut around the outer edges of an acne scar. The scar is removed and the wound is covered with a skin tape or possibly stitched. The idea with punch excision is to exchange the atrophic, pitted acne scar for a more conventional scar that is hopefully less noticeable.

This technique is similar to punch excision, but the acne scar is not actually removed. After incising around the scar, the scar tissue is elevated to be flush (or even raised) using skin tapes or even stitches so that when it heals, the area of the scar is no longer depressed or indented.

Complications such as depression or unevenness by raising the scar at its junction with the adjacent skin can occur, thus leaving a space and preventing the proper outcome.

Punch grafting starts with punch excision of the acne scar. The surgeon then uses the same type of cutting tool to remove healthy skin (usually from the area behind the ear) which is then inserted into the wound. The area where the graft is taken from is left to heal on its own with or without stitches. Punch grafting is considered the best surgical technique for ice pick acne scars.

Needling, also called microneedling and dermarolling makes use of a tool that rolls over the skin surface. The tool consists of hundreds of tiny titanium needled ranging in length from 0.25 mm up to 2 mm. By rolling the device over the affected area, a multitude of punctures into the skin are made. These punctures induce collagen formation, particularly when longer needle sizes are used. Collagen production can continue with this technique for up to 1 year, although results can be seen as soon as six weeks. Needling is a technique growing in popularity due to its simplicity, relatively inexpensive pricing, and low complications profile. The technique is generally limited, however, to boxcar and rolling type acne scars and is not effective for deeper ice pick type scarring.

Subcision is a popular treatment that is most effective for rolling type acne scars. With this procedure, the practitioner punctures the skin adjacent to the acne scar with a needle and then uses the needle itself to sweep across the base of the scar. This releases fibrotic attachments on the underside of the scarred skin which helps release the tethering and also induces collagen production to help keep the scar “propped up” over time. Like needling, subcision is a relatively inexpensive technique with a low side-effect and complications profile. Bruising and swelling often occur after subsicion, with scarring being possible but uncommon.

Grafting and Injection techniques involve the injection of material underneath an atrophic acne scar. In so doing, the depressed, indented scar is provided structural support from below to help elevate it to the normal skin level. Grafting techniques can be done with fat tissue taken from the patient or using synthetic filler materials. Grafting and injectables techniques work best for rolling acne scars.

With fat grafting, fat is initially taken from a body area such as the tummy using a needle and suction technique. The fat is then injected under the acne scar. This provides deep structural support to the scar in order to elevate it. But, don’t expect body contouring to be a fringe benefit of this procedure as the amount of fat taken is very minimal!

The major advantage of a synthetic injectable over a fat graft is that there is no additional procedure needed to acquire the fat tissue. While many synthetic substances are available to inject under acne scars in place of fat, by far the most popular is hylauronic acid products. One popular product is Juvaderm. These products are thought to work both by providing structural support under the scar (similar to how fat grafting works) as well as by stimulating the skin to create new collagen. A disadvantage of injectables for the treatment of acne scars is that the effect of the filler wears off over time and the treatment needs to be repeated.